Its going to be a good week for comedy. I’ve got a feature set this weekend at Laughs Comedy Spot in Kirkland, WA. If you are around Seattle, you really should come check it out. I’ll be debuting my new comedy character. The more “intensely nerdy” Brian Boshes. It sounds better in real life. I’ll also be filming on Saturday so new clips will be coming soon. That aside, I have something else to share with you today.

My friend James has fallen into a bit of luck with the ladies. This is said very mildly (which HE never does). Now, I’m a pretty handsome guy. I’ve got a good job. I own a car. I even tell jokes that some people find funny. What gives?!?! I’m funnier than James at least! Meth turkeys?!? Come on! That’s just weird. How could you ever want to make out with a guy who’s punch line is “meth turkey” (this arguement ignores the fact that I have a joke that ends with “Ninja Turtle / Care Bear”).

I think I’ve figured it out though. This guy takes a way better picture than me. Evidence #1: 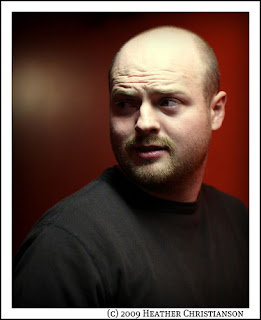 Just look at him. That’s a great picture. You wouldn’t even think to yourself that this guy wasn’t as funny as Brian. It oozes confidence and a “well I don’t care if you fuck me” attitude that I with I could capture on film. Case in point, I give you Evidence #2: 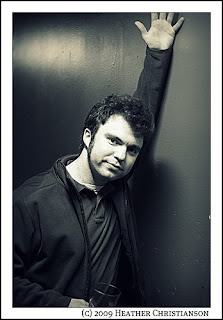 Who is that guy!?!? My god. It doesn’t help that it’s in B&W either, but this picture is giving Ted Bundy a run for his money (as far as pictures go) on the creepiness scale. Probably one of the weirdest smiles I’ve ever gotten captured on film. Then there’s that hand. What was I doing? Saying hello to something, stretching out some unknown muscle in my back that needed attention, or just being weird? I think the latter. Thank god my hair has grown in from this time too, I don’t even want to go there…

So there it is, the one singular reason I’m not doing so well with the ladies right now. Now that I’ve called it out, it shouldn’t be an issue anymore. So, now that its been eliminated (as I promise not to take pictures like that anymore) let the deluge of pent up sexual aggression for my hot bod come pouring down on me. I’m ready!