Last night’s event was at the Historic Everett Theater in Everett, Washington. This place was a beautiful theater right in downtown Everett. Seated about 800 people on a packed show, I think we had around 450 people there. It had a mezzanine about a quarter filled (more on that later). Still, it was going to be very interesting performing in this kind of place. I have never done a theater show before, so this was many of the interesting learning experiences I knew that I would get in this competition. 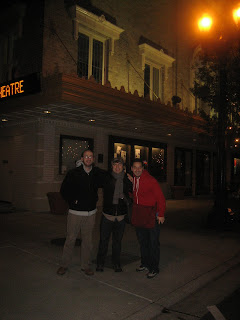 I drove Ahmed Bharoocha and Josh Gondelman up there with me again. They’ve been good car pooling buddies. I’ve been taking the opportunity to bend their ear about Boston comedy and the scene out there. Networking with other comics is key for these sort of events. It’s really the one thing that everyone gets out of the competition now matter how you place. Unless you’re a douche-bag that no one wants to talk to. Thankfully, we haven’t had any of those in our week, so overall the group dynamic has been great. Hopefully when I’m in Boston, or Dallas, or New York, or wherever, I’ll be able to call back to these experience and friends that I’ve made so far in the competition and get some good stage time, or at least a couch to crash on. Ok, enough sappy stuff, back to the competition!

The Everett Theater has a great backstage, mostly because its a real theater. It was kind of cool to hang out behind the curtain and listen to the show, knowing that just a couple of inches beyond it was a comic and 450 people listening to him. Steve Monroe took the opportunity to explore the entire theater, including the rafters, while the performance was underway. What are you going to do with an ex-tech geek with a flashlight, I just don’t know. Regardless, the backstage was more popular than the green room tonight. Possibly because the green room was the dressing room and sounded like there were birds mating in there due to a squeaky belt driven air exchanger in the basement. The backstage was also well insulated (unlike Auburn), so we were able to converse with each other about the sets previously and currently on stage.

I was up 9th tonight, which for most would be the best time to go up, but this night there was an intermission between the 8th and the 9th comic. This meant I was essentially the “first” comic in the second half. The host, Paul Myerhaug, who has been awesome by the way, did about four minutes in front of me to get the crowd going again. I hit the stage and it was another great set! I mean, I got my closest to going over seven minutes (with 6:34) because the crowd was laughing at my jokes for so long. I felt super comfortable coming off of night 3 with my newly arranged set and it shows. Also, comparing my nervousness level from night one to last night, wow what a difference. The confidence level and timing with which I’ve delivered this set has increased so much during this competition. I knew that I had a lot to gain going into this, more so than many of the competitors in this week, and my performance last night has shown that I took my punches from night’s one and two and am bouncing back.

The long and the short of this though was that I didn’t place last night. I apparently was very close to placing, as everyone was every excited to tell me that I was very close to placing, which means I took sixth. Not bad for someone who couldn’t close just two nights before. 🙂 At this point though, every is surely freaking out about the scores. Word on the street (and mathematically), is that the top three spots are already locked in at this point in the week. This is not surprising, as Jose Sarduy again took first tonight. Matt Billon, Steve Monroe, Roger Lazola, and Jane Stanton rounded out the top five. Beginning to see a pattern here?

Spot number four is also pretty much spoken for. The fifth spot is up for grabs though. Currently Jane is in it right now, but I’ve been told that everyone down to 12th is a contender for 5th when you take into account the drop night. I’m tenth in that list. Dammit guys! I’m trying not to look at my scores here. Anyone who is going to, or who have been in this competition, not looking at your scores is the toughest freaking thing to do, especially as it comes down to the wire and everyone is freaking out. You will find out, even if you don’t want to, because someone will want to talk with you about it and will “fill you in” just so they can complain or brag or whatever about their own position. “Hey Brian I’m 8th so I’m still in the running, you’re 10th by the way so you shouldn’t give up either.” Dammit! Stop unpurifying my thoughts!

Jose Sarduy has been a really great guy to hang out with during this competition. Last night he offered me some great advice about merchandising and doing theater shows. Talked about writing jokes, his experiences in the San Fransisco competition, and just good comedy. He also complimented me on my sets the last two nights, which doesn’t hurt either. It’s this kind of stuff for which I’m really exciting to be participating this year. The field is so good, the sets are so polished, that I can’t NOT learn anything just by being here.

We went out for drinks with most of the competitors last night in Capitol Hill after the show. This was the first (and probably only) outside show hangout everyone did together. We had a good 16 people at the bar, it was a nice sized party. I drove Ahmed and Josh down from Everett, and I introduced them to Dic’s Hamburgers on the way to the bar. Ahmed says, “I’m kinda hungry” and I turn to him and say, “I know what we can put in your stomach, some Dic’s.” It then took me five minutes to undo the damage and convince him that Dic’s was an actual drive in and not some gay stripper club. It’s kind of a Seattle institution, just a notch below In-N-Out Burgers. They loved it and my car was filled with the smells of Dic’s all the way to the bar.

I really need to take a shower as my ride is about 15 minutes away from picking me up to drive me up to Bellingham, where tonight’s show will take place. Stay tuned for the fourth installment tomorrow!