Ok so I already haven’t kept to my one blog post per night. Sorry, I had to go to work and it sucked yesterday. So here are my updates from nights two and three. Night two was at Laughs Comedy Spot in Kirkland. This is my home club, so I was expecting a great set. I was scheduled to go up third, which was a little early. I went after Jose Sarduey, which was the guy who took first from the first night. He had another great set, which I think set the expectations a little high for my set.

Regardless, I had a strong opening again. I think I lost the crowd though when I started being a little mean during my online dating joke. I also tried some new segways that were a little clunky, as I wrote them outside the club. Mistakes one and two for the night. I ended with a whimper again that night, which was upsetting as I was hoping to show well at the club I do the most sets at. Oh well. Steve Monroe took first with a joke about the five types of hugs, where he hugged some lady from the audience and explained what he was doing. I’m so upset that this guy comes into my home club and rips off my “Five different types of hand jobs joke”, albeit my joke is a lot harder to get a participant to help with. Jose Sarduy, Roger Lazola, Matt Billion, and Andy Hanyes filled out the rest of the top five. Cy Amundson also had a great set, but was denied placing. Fun times in the life of comedy competitions.

So now we’re going into night three, the Auburn Theater. I had gotten interviewed by the Auburn Reporter on Thursday when I was leaving work. I thought that I might be one of the many people that were being interviewed for the paper. I was wrong. When I got to the theater, a woman approached me and said, “I recognize you from the paper.” I got a hold of the article that she was talking about; my mug was on the front page. Pretty cool eh? I was a good page long article about my rise to comedy greatness and my participation in this years show. Well maybe not greatness, but it talked about how I hate bombing my first year doing comedy. He also spelled my name “Boshe”, which my dad wasn’t happy to hear about. That last “s” is important you know.

The show in Auburn was awesome. Everyone was having killer sets. Josh Gondelman, a comic in from Boston who I had given a ride to the gig that night, went up and had the best set I’ve seen him have so far in the competition. He’s a Jewish comedian of a similar age, our acts our quite a bit different, but he was the one for me to beat tonight. I was up 14th, which I was concerned about maybe the crowd becoming too tired by the time I hit the stage. I couldn’t have been more wrong. They stayed strong the entire night and I had the best night in the competition so far.

In the previous nights, I had done a joke about “morning sex” and also a kind of sexist tag during my online dating routine. Both of those bits destroyed my closer, and I always ended weakly. I was determined to change this going into tonight. It was also “TV-clean” night, which meant that the morning sex bit was pushing it, so there was extra motivation there. I decided to replace both of those with a bit about restless leg syndrome drug and my experiences getting my wedding suit fitted, the latter which I had done on night one. The difference was sizable. There wasn’t a reason for the audience not to like me anymore! I finally got to close strong, got my encore point, and left the stage thinking “that is how I should have been competing from the start”. 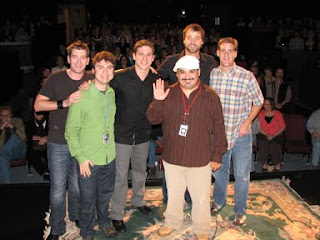 This performance was enough to eek out fifth place right in front of Josh Gondelman, who was right behind me be one tenth of a point. I placed! That is really all I wanted to do; place one night of the competition. Get that coveted picture of me and the four other finishers that night. I was so excited, and happy, and thrilled to be on that side of the stage, in front of that great crowd in Aurburn, after having my best set of the competition so far. After the show, I went to Denny’s with Josh, Cy, and Ahmed and had way too much sugar, and then drove Josh and Ahmed back to their host house in Wedgewood. What a great middle of the competition. I’ve reach my goal, and still have three more nights left in the competition. I figured out my set, this is what I’m sticking with for the rest of my competition. Too bad it took two nights to figure it out. 🙂 Who knows, I might actually have to start thinking about moving on to the semis, which in all honesty, I had ruled out before tonight.

Oh, and if you want to read the article, I’ve linked it here.