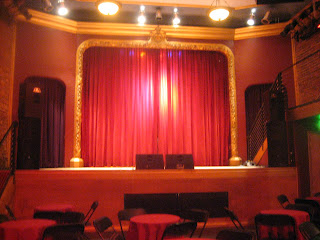 I’d like to say that it worked out that way and I wasn’t anxious. That couldn’t be more from the truth. I was super nervous getting through my entire set. My opener fell correctly though and my follow-up joke, which I had changed the wording to moments before hitting the stage, worked as well. The middle of the set also went well. My morning sex joke didn’t quite land like I wanted to, but I heard a bunch of people loosing their shit somewhere in the audience, so overall I was happy. My closer did ok, but the thing I’m most upset about was I flubbed putting the mic back in the mic stand. I was so embarrassed as I sat for a good 15 seconds and tried to figure out how to jam it back in there. That might have cost my some points in my technique or something, but I’m not looking at my scores until this entire week is over. Should save me from a lot of head games. I did get the all important “encore point” which adds a point to my score. All but two comics tonight got that, and those that didn’t had a bit of a meltdown (understandably).

So I didn’t make the top five tonight. Jane Stanton, the only female in the group, took fifth. Matt Billon was fourth. Andy Haynes and Roger Lazola were third and second respectively. Roger had just come off the finals for the San Francisco comedy competition, so the second place finish was not to say expected, but well justified. Jose Sarduy took first and it was totally warranted. That guy destroyed the room tonight. His mostly Cuban-themed set was well polished, high energy, original and the crowd just ate it up, including yours truly. I’ll be really excited to see him do that set again and again in this competition. If he keeps having reactions like that though, he’s in the semis for sure.

It’s going to be a really tough week from a competitors standpoint. It’s just a really great field. There aren’t any people that you watch and go “he’s definitely not in the semis”. Really, after only one night though, it’s still anyone’s game; no one is going to go quietly in this competition. That being said, all the guys seem really cool and fun to hang out with. I won’t go into it too much more than that after the first night as they could all be douchebags and it may take a day or two to tease it out of them. Regardless, I hope to make some new contacts at least in some new markets and hopefully they enjoy Seattle.

Tomorrow we head to Laughs Comedy Spot in Kirkland, my home club. I’m going to shake whatever is left of these nerves and bring it tomorrow, HARD. Can’t wait!

UPDATE: Just watched the video. It looked way better than I thought it was. Rock on!