Yep, that’s what I was doing this weekend. Bobcat Goldthwait came to Kirkland this weekend as part of his “Alimony 2009” tour, and yours truly was his opener. Funny how quick this gig came up. I remember what Laughs Comedy Spot’s owner, Dave, asked me about wanting to do this gig. I was floored. Bobcat Goldthwait!?! Me? Really? That’s awesome. I’ve been listening to this guy for years, his last CD was hilarious (pick it up if and take a listen). I know, a lot of people grew up with this guy, and I’m about as old in living years as his comedy career, but it was still a big deal. So that was back in March I think and I was thinking to myself, “wow, July, that’s in a while”, but it has gone and went.

So I’m basically writing this post as an answer to the “how was it”s that I’ve gotten from all my friends. Not that I don’t love them, thanks to everyone that has asked, I just work during the day and wanting to respond to each of you was making my head spin. So here’s how it was…

We did four shows. Two on Friday and two on Saturday. I had done a show the night before at Laughs with a Dr. Kevin Fitzgerald (cat doctor / standup comedian) so I was feeling pretty good and practiced. One thing about this weekend that bothered me is that I didn’t really have any new jokes besides one that I wrote last week. Good news is, the new joke is awesome, bad news was that I was doing a lot of material that people may have already seen. This bothered me some going into the gig (takeaways from the gig to follow). I didn’t get to meet Bobcat until after my first set since he got there in between me hitting the stage. His sets were awesome. He did about 20 minutes it seems on Michael Jackson. I know that he had about 10 minutes on him before he died, so I think he knows that this is the death of the Michael Jackson bit tour. At least it would have seemed that way. Hilarious though for the next couple of months. He also told a joke about almost dying in a plane crash and the pilots reaction basically should have been, “ok, I’m going to try some shit I learned in pilot school…” Had me rolling every time (4 times).

My sets were all good. I never came close to bombing, although the first nights crowds were there to see Bobcat and really couldn’t give a rat’s ass who the openers were (or so it would seem). Here are some takeaways though from the weekend:

I got a new Mike Birbiglia CD from Amazon.com today, so I’m giving that a listen as he is doing the kind of story telling I want to be striving for. “Two Drink Mike” is his first one, already consumed that. It was a little bit better than “Secret Public Journal”, but this one has more stories, and since that’s what I’m trying to do, well there ya go.

Oh, and here is a picture with me and Bobcat. I’m way too happy in the picture but the other one didn’t come out very good. I think it’s because he just wrote “Good Job” on my CD before signing it… 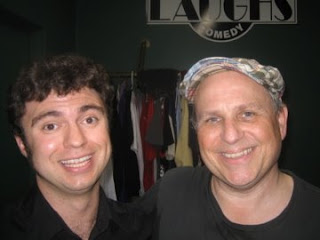 One thought on “Opening for an 80’s Legend”