That is where I performed last weekend. Did a one nighter filling in for a comic friend of mine who had to go out of town. Got the call two weeks ago, so it wasn’t super last notice. Gig paid well and included a hotel room, and I haven’t been on a road gig for a while (last one was Longview with Duane), so I was looking forward to it.

The gig location, the Northern Lights Theater Pub was an interesting place. I had never heard of this place before and didn’t, for some reason, Google the place, so I had no idea what it was before I drove up. It is sort of what the name implies. There is a theater there, but like movie theater not drama. Four screens I think. The comedy was in theater 1. The “pub” part comes from the fact that you can eat and drink in your seats while watching said entertainment. They have a beer/wine bar and waitresses that will come to your table to deliver your food.

I performed with a comic that goes by the name Kermit Apio. That is his real name, and yes he has a joke about it. Regardless, very funny and all around great guy to hang out with. After the show we walked across the parking lot and had Mexican food together and he told stories about what it was like to work with some of the headliners he’s had the pleasure to work with recently (Brian Regan). I had nothing nearly that epic to share.

The two gigs went ok. Here is my takeaway from the evening. I think I’m at my best when my act sounds like a story or a conversation with the audience. What this means is I really can’t just put up funny observations or impressive thinking that I think, given the right mindset, could be interpreted as funny. My most solid jokes have a story behind them, with some victim (mostly me), and I deliver it in a more conversational style. Tonight at the open mic I tested this theory, and I liked the results. My joke about mating with a tall hot blond woman isn’t an observation, it’s a fantasy story that gets more and more fantastical each time I tell it. 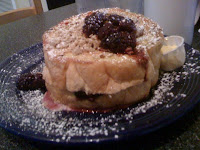 I also haven’t done a breakfast post in a while, so here is a picture of the epic french toast I had the morning after the gig at a place called the “Saucy Onion” in Salem. Apparently this stuff is world famous, and I got the blintz version with marscapone cheese and marionberries. This was in a box with little onion cartoons next to it, so it must have been the extra world famous version. They went light on the cheese, which in the end was a good thing. The round bread is a mystery to me. Overall, solid french toast though. After slathering some syrup on this thing and two and a half cups of coffee, I was good to drive back to Seattle. Next time, I’m either going to get the prosciutto and eggs or just half a french toast with eggs and bacon. This was a little too much bread for me in one sitting, but I’m not really complaining at all.