Meeting characters from your childhood (or in my case older-hood), no matter how obscure, is always a thrill, at least for me. It’s one of the major perks of being a standup comedian. This year I’ve been fortunate enough to be in the right place at the right time to catch a couple of them as they were passing through Seattle.

One of them I actually had the pleasure of opening for. His name is Ben Bailey. Most would know him as the host of television’s Cash Cab. I have seen him on that show of course, but my personal connection to him is that he was one of the first live standup comedians I saw at a comedy club. I caught him with a couple of my friends at a showcase at The Comedy Cellar in New York City. I remember a couple of his jokes, the most vivid was a joke about how he wasn’t going to do his “jump-roping joke” at this club (as he’s over 6 feet tall and the celling is about 7 feet at this particular club). I just remember that killing my friends and I (let alone the entire audience). So flash forward almost six years later (I was a sophomore in college when this happened), and he’s coming to Laugh’s Comedy Spot and I get to host the show he’s on. Holy crap this is awesome! 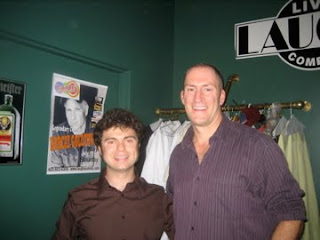 Here’s a picture of myself and him that we snapped on the second night. Slight height difference, no? I was his driver to the club (my “cab”) on both nights, which gave me the chance to share the story above with him.z We talked about the jump-rope bit and whether it was still in the rotation. He shared some behind the scenes stories about the Cash Cab while the feature was on stage (Gabriel Rutledge, amazingly funny). His act has some pretty good stories about it too, so if you get a chance to see him live and are a fan of the show, you should really go. Even if you aren’t, the story he tells is freaking hilarious regardless.

Ok, so that was pretty cool. A comedian from my past revisited. Can we top that this year? Of course!

Enter Bill Dwyer. Most people wouldn’t recognize him out on the street (which is my favorite type of famous) but if you were a nerdy kid like me in the 90’s you know his face and voice well. Who is Bill Dwyer and why does Brian have an obvious celebrity crush on this guy? Well, its because he was the host and lead commentator on Comedy Central’s Battlebots! This was before Comedy Central had enough original comedy programming to fill the entire day, so some of it was filmed with random stuff like this. Bring on the random stuff I say! Battlebots was an WWE type show with robots instead of big muscular dudes, and Bill doing his best to bring words to the metallic carnage that was unfolding on your reasonably sized standard definition TV. It was on for a couple of seasons, so it filled some of my more impressionable years. I wanted to build a battlebot and have Bill narrate its rise to remote controlled stardom. That was my dream. Well, I never got to build a battlebot, but I did get to talk about them with Mr. Dwyer, which is close enough that I can die happy. 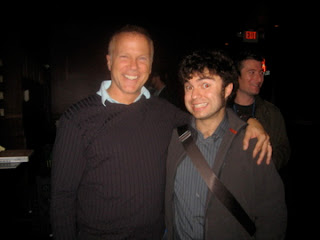 As you can see from the picture about, I was very (too) excited. Even better, he was super cool about me nerding out with him. I was thinking I was going to get a “that’s great kid” type of response, but instead we talked about all the people and robots from original show, all the merchandising that went on, and even how some people are working to get the show back someday (fingers crossed). Then I was honored to have him watch me eat shit in that night’s round of the competition where I took last place (having now looked at my scores I know this). Even after throwing my chances at moving on in the competition, he still took that picture with me though. Childhood star meeting, check!

So its been a pretty good year for meeting people, if not getting better at this whole comedy thing. BTW, last year I met Robin Williams and got this picture taken. So that year is pretty much the year to beat. 🙂 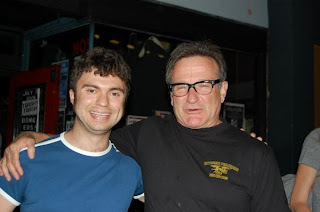