I decided that I needed a change this weekend. A large part of this change involves removing a massive amount of hair from my head. My poor barber; we had some fun though. Here is a nice before shot: 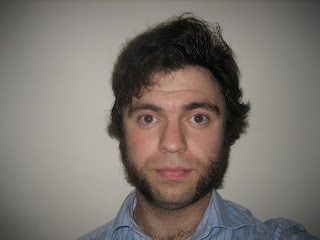 The sides are a bit matted down from wearing my bike helmet (which is the other part of the change, more on this in a second). After about an hour of hard work and a couple jokes from me this is what we ended up with: 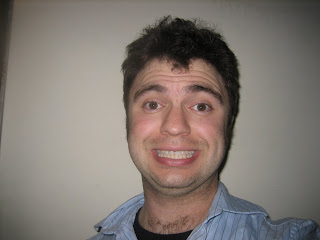 If I look a little strung out with its because I’m not used to having such little hair, and the picture was taken after $35 of sushi and saki, plus two more beers. I only got charged for one of the two, so chalk one up to the Bri-myster.

Ok so hair, GONE! I know. It was getting too much though. I was being brought on stage as Wolverine every time in the last couple of weeks, which, I know, I brought on myself, but it was becoming a little creatively stifling. Now I’m free from the bonds of facial hair (body hair is another story) and can write jokes that aren’t about my likeness to a bad ass comic book character. That, and I’ll just revert back to my old intro likeness, hobbit. For those that miss it, fear not, for I documented some comedy with the chops (and in character) that will be posted on the interwebs as soon as its edited.

Part two of my spring self-cleaning is that I’ve been biking to work again. I don’t have fenders on my bike, so I can’t ride when its raining, which in Seattle is severely limiting, but it doesn’t really “rain” here much as just miserably precipitate all over everyone. That being said, I ride in the rain. Unless its pouring (ie, actually raining), and then I drive, because I have a car and that’s why we invented them. In addition, I downloaded all the P-90X series of workout tapes and have gone through a couple of them. I wuss out at the halfway point, when the guy says its time to do all the exercises again, so I’m currently operating at around a J-45L workout level. This is fine for me now, as I’m still sore in places I didn’t know I could be sore.

Off to do some writing for the day. I’ve got lots of gigs coming up around Washington. Have a sold out show in Richland with Brad Upton on the 24th (which you probably won’t be going to), and I’ll be hosting the Dating Game again at Laughs Comedy Spot on the 22nd (which you probably should go to). Check my MySpace for more details.