The Bend (International) Comedy Competition was awesome. I was knocked out in the first round! Wait Brian, how do those two go together? Well about the set. I thought I was going to connect a bit better with the crowd in Bend as I was told they were “smart” comedy audiences. They (being the judges and most of the audience) did not know who Wolverine was. It was a reference that the entire first joke hinged on. Not good. My new joke about doing drugs with a ninja turtle, ERROR, wrong again. The good news is, the people that did get it, LOVED it. My favorite was one waitress coming up to me the next night and feeling so happy because she went by the park that morning to see some guys LARPing, and because of my set the night before, she finally new what they were doing. 🙂 So, coming off of my Bend experience, I really feel jazzed at the path I’m plowing. Now though, I feel pressured more and more to write to this voice as the audience reacts and relates much better to this new character, but this, my friends is a good thing. The bad thing is that I haven’t had that much time to write, that’s another story.

Other highlights from the weekend:

Here is a picture of me in front of said brewery. If you squint you can see the amazing chops I have right now, but this picture really doesn’t do them justice and I don’t have a good picture yet where I don’t look like Wolverine’s dad. 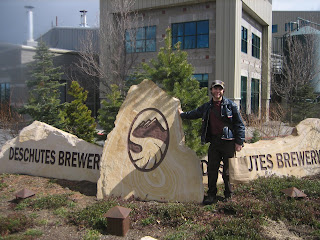 In my new quest to visit places I would never get to visit without comedy as an excuse, I’ll be off to Richland and Port Angeles, Washington in April. The former is part of Central Washington’s Tri Cities area, the latter in on the peninsula. I will be visiting farms in both places most likely. Two more opportunities to see if my humor translates to what I’ve found is the safe harbor of Seattle and Portland. It only gets better from here my friends…

One thought on “Back from Bend”